It’s been a while since re:Invent happened, but in my defense it has been a very busy three months. Other than Christmas, New Years, taking some time off and working with clients I had the opportunity to attend the recent re:Invent held in Las Vegas. Going to re:Invent in Vegas was an excellent way to catch what’s been happening in cloud technologies and what to keep an eye out from the eponymous service provider. In this post I’ll start with the fun stuff like the swag, welcome reception and 5k run and finish with the breakout sessions I really enjoyed and got the most out of.

To start with here’s what you’re all interested in, the sweet sweet conference swag. re:Invent was brilliant. Here’s a summary of my favourite things picked up while there. 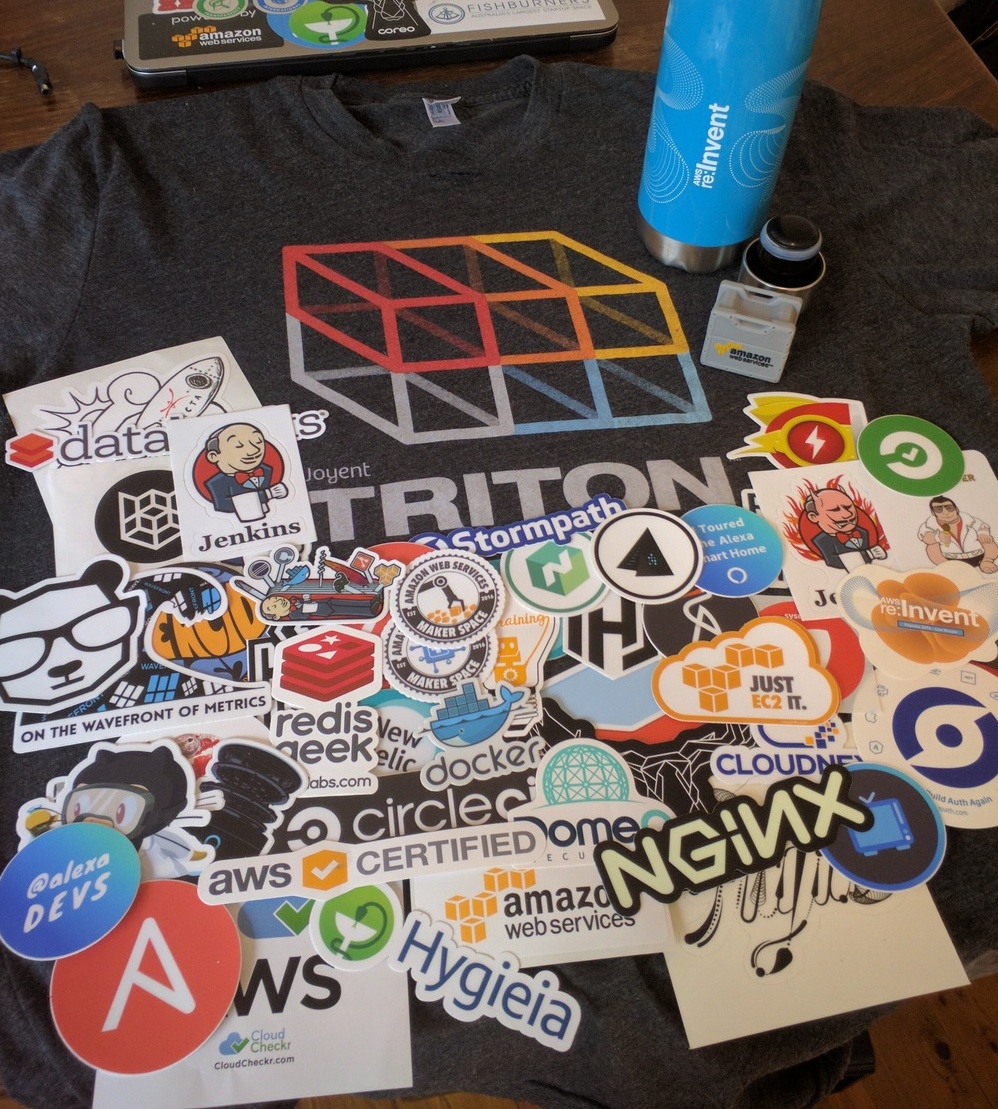 This was all of my favourites, the one thing I regret not getting was one of the re:Play Las Vegas 2016 grid t-shirts with the compute cube in the middle, if anyone knows where I can get one let me know.

Of course all of this event swag was collected from the conference hall, much of it on the welcome reception night. There were 30,000 attendees and from the queues to enter the hall a good percentage of that number were present. There was a great vibe and you can tell that AWS really fosters fun in their community, it was also great to hear about new services vendors are promoting and see the projects AWS work on that aren’t generally at the forefront.

Pictured below is the Simple Beer Service stall in the developer lounge.

I’ve done some running in the past so I took the opportunity to do the conference 5k run, how often do you get the opportunity to sprint through the streets in a country you’ve never been to before right? Something that added some extra dimension was the forecasted freeze warning of below zero celsius the night before. Luckily the day was alright temperature wise, staying just above the positive degrees and was good fun, I ended up with a time of 25 minutes, 19 seconds. 189th out of 985, not too shabby!

re:Invent is one of the rare opportunities where you can have a chance to see presentations by architects and developers who are on the forefront of technology and ask questions to improve your understanding of services and take home some new techniques you can use in the field. I chose a set of sessions which were a mix of the work I’m doing at the moment (AWS account compliance and security) and my personal interests (Formal reasoning, AI and the frontier of software development). Here are a summary of my favourites, I highly recommend checking out the re:Invent breakout session YouTube channel, so much win.

Another Day, Another Billion Packets (NET401)

A great 400 level talk about the networking issues AWS face with their under the hood infrastructure and the solution outcomes. As a day-to-day user of AWS you will generally not see any of this, this talk gave insight into the service history and why some of the networking services are the way they are. If you’re new to networking there is a lot to digest in this talk but it’s hugely worth watching, especially in retrospective after re:Invent.

Compliance Architecture: How Capital One Automates the Guard Rails (ARC312)

This talk by Peter M. O’Donnell and Kapil Thangavelu was my introduction to Cloud Custodian which I have now been using for the past two months for a compliance project, a great tool I will hopefully have time to write about as an extension on AWS account compliance work I’ve written about in the past. Keep an eye on this project as it takes away the necessity of building your own automated account clean up and management tool. CloudCustodian can be found here.

A great talk about the S2N project about analysing the code behind the heartbleed SSL bug of 2014, how to improve software development practices that can let bugs like this slip by and the development of vulnerability detection solutions. Also a good eye into how AWS gets involved in open source software.

Bringing Deep Learning to the Cloud with Amazon EC2 (CMP314)

This was a talk by Tom Jones and Diego Oppenheimer, Deep Learning is not specifically my field but it’s great to see how AWS and Algorithmia are harnessing the graphical hardware side to perform some amazing graphical processing tasks, super interesting stuff if you have the time to watch.

This was another great talk, by Kyle Knapp. I walked into this one thinking I was a pretty advanced user of the AWS CLI and came out surprised, I discovered some of the newer features added into the CLI can really speed up the time to automate infrastructure tasks and help you build your own set of command primitives.

In summary re:Invent was excellent, I’d highly recommend it if you’re a heavy user of AWS, being surrounded by the people who build the worlds most prevalent cloud platform really made for a great week. I originally hoped for this post to be a longer one, seeing as how much happened over the week, what I took away in terms of AWS compliance checking and my extra week touring around California but it the post was already getting too long, next up I will have another compliance post.